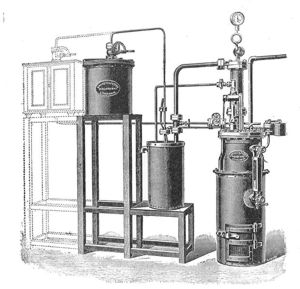 The History of Refrigeration

Below is a summary for the history of refrigeration. This information was gathered and collected for those who might be interested. Hope you enjoy! 🙂

1756-The first known method of  refrigeration was demonstrated by William Cullen at the University of Glasgow in Scotland. Cullen used a pump to creating a partial vacuum over a container of diethyl ether, which then boiled, absorbing heat from the surrounding air. The experiment created a small amount of ice, but at that time, had no practical application.

1758-, Ben Franklin and John Hadley, lecturer of chemistry at Cambridge University, performed an research to discover the most crucial of water loss as a means to quickly cool an item. Franklin and Hadley verified water loss of highly unpredictable fluids, such as alcohol and ether, could be used to drive down the heat range of an item past the freezing point of water. They performed their research with the bulb of a mercury thermometer gauge as their item and with a bellows used to “quicken” the evaporation; they reduced the heat range of the temperature gauge light down to 7 °F (−14 °C), while the ambiant temps were at 65 °F (18 °C). Franklin mentioned that soon after they passed the freezing factor of water (32 °F), a film (thin) of ice established on the surface area of the thermometer’s bulb and that the ice bulk was about a one fourth inches dense when they ceased the research upon attaining 7 °F (−14 °C). Franklin determined, “From this research, one may see the likelihood of freezaing a man to death on a hot summer’s day”.

1805- American Oliver Evans developed, but never built, a refrigeration system know as a “vapor compression refrigeration cycle” rather than volatile solutions or liquids like ethyl ether..

1834.- American Jacob Perkins , recieved the first patent for a refrigerated vapor-compression system. Mr.Perkins built a model/prototype system which worked but did not succeed commercially.

1842– John Gorrie, who was an American physician who designed the first system to refrigerate water to produce ice. He also conceived the idea of using his refrigeration system to cool the air for comfort in homes and hospitals (i.e., air conditioning). His system compressed air, then partly cooled the hot compressed air with water before allowing it to expand while doing part of the work needed to drive the air compressor. That isentropic expansion cooled the air to a temperature low enough to freeze water and produce ice, or to flow “through a pipe for effecting refrigeration otherwise” as stated in his patent granted by the U.S. Patent Office in 1851.[7] Gorrie built a working prototype, but his system was a commercial

1848- Alexander Twining  experiments with vapor-compression refrigeration and obtains patents in 1850 and 1853. He is given credit for  starting commercial refrigeration by 1856 in the United States.

1851-Australian, James Harrison started his operation of a mechanical ice making machine on the banks of the Barwon River at Rocky Point in Geelong, Victoria. 1854 his commercial ice-making machine followed, and his patent for  ether liquid fumes compression refrigeration system was granted on 1855. By By 1861, appoximately 12 vapour-compression refrigeration systems Harrison introduced were used commercially for breweries and meat packing houses.

Australia, Argentine, and United States tried chilled delivery in the mid 1870s; the first professional achievements came when Bill Soltau Davidson fixed a pressure fridge device to the New Zealand boat Dunedin in 1882, resulting in a beef and milk growth in Australasia and South America. J & E Hall from Dartford, England equipped the ‘SS Selembria’ with a steam pressure system to carry 30,000 carcasses of mutton from the Falkland Islands in 1886.

1897 -Carl John Gottfried Linde, developed as Ritter von Linde, was a In engineer from Germany who created refrigeration and gas separating technology. In 1890, he became a speaker at the Technische Hochschule in Munich. Years later, he became a complete lecturer and set up a clinical where he proved helpful on creating new refrigeration cycles. In 1892, the transaction from the Guinness Brewery in Dublin for a co2 liquefaction plant forced Linde’s analysis into the place of low temperature refrigeration, and in 1894 he began perform on a procedure for the liquefaction of air. In 1895, Linde first obtained achievements, and registered for patent protection of his procedure (not accepted in the U.S. until 1903). In 1901, Linde performed on a strategy to acquire pure oxegen and nitrogen depending on the fractional distillation of liquified air. By 1910, colleagues (including Linde’s son Friedrich) had designed the Linde double-column procedure, versions of which are still in typical use today..

1859 – Gas absorption refrigeration system first began using gaseous ammonia dissolved in water (known as “aqua ammonia”) was designed by Ferdinand Carré of France in 1859 and trademarked in 1860. The Servel company designed gas operated, absorption refrigerators in Evansville,IN from 1927 till 1956. In the U.S., the cunsumers in those days still used the ice box with ice brought in from ice companies, many of whom were still growing ice and saving it in an icehouse.

United states balloonist ,Thaddeus Lowe, had tried the qualities of gases. One of his businesses was the high-volume development of hydrogen gas. He also held many patents on ice-making devices. His “Compression Ice Machine” would change the cold storage market. In 1869, investors and he bought an old steamship onto which they loaded one of Lowe’s refrigeration models, and started delivery fruits from New York the gulf coast area, and fresh beef from Galveston, Texas back to New York. Because of Lowe’s lack of know-how about delivery, the business was a expensive faiure, and it was challenging for beef consumers to get used to the concept of being able to eat beef that had been such a long time out of the packaging house.

Domestic refrigerators as we know it today, became available in the United States at or around 1911.